An Assessment of Workana for 2019

I rarely end up writing an annual assessment. My excuse has always been that in all the activity at the end of the year, I don’t have time. Like all good excuses, there’s some truth to it. But this year I decided to face the music, and for the past month, I’ve been thinking about this article.

I didn’t want to put it to one side, because 2019 was a pivotal year for Workana and it was important to me to take time to reflect a little bit. I need to meditate on what we did in this insane year, but also to try to explain some of the changes that took place during this season.

These assessments are personal, but I would normally say that I’m talking to the Workanans who work every day to improve Workana, the freelancers on the platform, the clients who hire through the platform, and/or entrepreneurs in general. This year I’m going to focus on only one group: the freelancers. I want to speak to you as directly as possible because I feel that you are the ones who most need to hear why Workana has changed so much this year.

For starters, I want to review the objectives that we made as a company at the beginning of 2019:

Now I will explain each objective and the “why” behind it.

We made our first objective based on our desire for the best Workana freelancers to earn more money, period. If we want the best freelancers in Latin America to be part of our community, then those freelancers’ income must improve. This is essential. Everything else is secondary to this (I’ll get to all of that later). We did a lot to change this number, which was challenging since it hadn’t varied much since the start of Workana.

Why do we want to change that number? Because the best freelancers have to make good money. Furthermore, until now, jobs gave a lot of opportunities to new freelancers who still hadn’t proved their experience and worth in the community. This created a negative experience for many clients, who ended up working with freelancers who hadn’t been proven in their field. Additionally, we were putting top freelancers in competition with those who had not yet demonstrated their value on the platform.

We did really well with this objective: 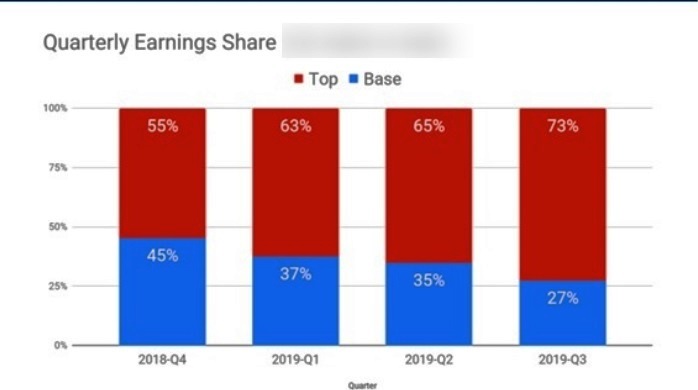 One would probably think that merely altering the percentage that goes to top freelancers isn’t right. We think differently. We believe that in order to achieve a healthy community, those who are giving more to the community should be the ones earning the best income. Those who are most successfully participating on the platform are those who should get the most out of it (hold that thought, because we’ll come back to it).

“Those who are giving more to the community should be the ones earning the best income.”

And the big objective was to change this dynamic, but we also had to achieve growth in the top freelancers’ income. On average, they had to earn more. 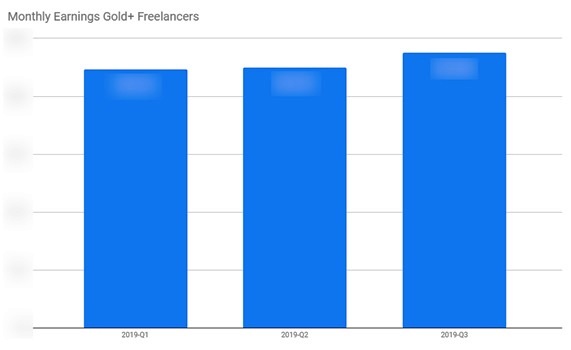 In this graphic (forgive me for covering the numbers, but we can’t share them) you can see how by the third trimester of 2019, we grew 12% compared to the previous trimester. It was the first trimester that we made changes intended to improve the top freelancers’ income. 12% from one trimester to another is a great result, but we’re not content with that and want for it to be much more.

This first objective, perhaps the most important one, will be continued below. I want to review the rest of the objectives and later revisit the changes that we made in the community.

To raise the client investment by 20%

If we want to improve the quality of the market for the long term, we have to require more from all of its members (ourselves first, then freelancers and clients). The main objective that we made for the client side is that they invest more in the platform. Furthermore, all year we did experiments aimed at improving the level of the projects on the platform. One big experiment was to require larger client budgets according to the project type (I will show these experiments below). 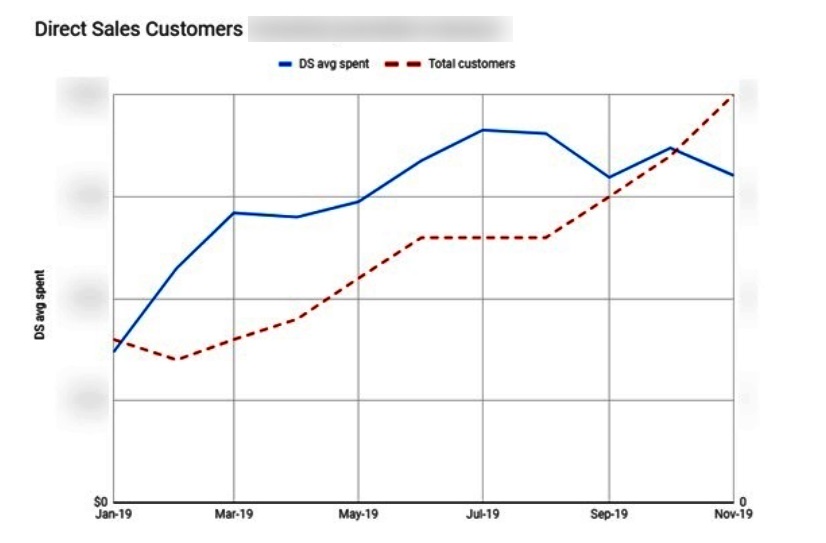 In the graphic, you can see how the average investment of our biggest clients (corporate clients) grew this year. This average more than doubled in the same year and that’s considering that we also more than doubled the number of clients of this type. We’re talking about Workana’s biggest clients, who invest tens of thousands of dollars every month in the platform.

The goal of Workana’s focus on these major clients is to attract even more sophisticated clients to the platform who understand that price is not the most important thing, but rather place greater value on the quality of work and the speed of finding talent on the platform.

On the other hand, we also do experiments aimed at making the jobs have higher value. This means that the client pays a value that is closer to the value that the majority of the freelancers are bidding. It also means pushing lower-bidding freelancers to make a better proposal.

In the image, you can see the result of one of these experiments. In this experiment, we tried putting minimum limits on freelancer bids so that they wouldn’t bid below the client’s minimum budget. For us, if the number on the right is equal to the default value, it’s a positive thing.

It’s positive because although it doesn’t imply a better overall result for Workana, it does mean that the freelancer who wins those jobs did it with a higher value than the previous average. However, while carrying out these experiments, the value went up in almost all cases.

This is another way in which we attempted to improve the market dynamic, leading clients to select better bids, but not based on price. By leveling the bids a little more, price stops being a major factor in deciding which freelancer to work with.

There are many more experiments and projects we did this year, but I wanted to take these as an example so that you can see how we are working to improve the market.

As you should already know, for the past almost two years we have focused on creating more long-term relationships on the platform. We want you to work more with clients and freelancers with whom you’ve already built trust. One simple way to encourage this was implementing the scale for commissions.

However, this isn’t even close to being the only thing we did in this area. For example, this year we launched the recurring payment function so that freelancers can charge fixed monthly payments from clients. 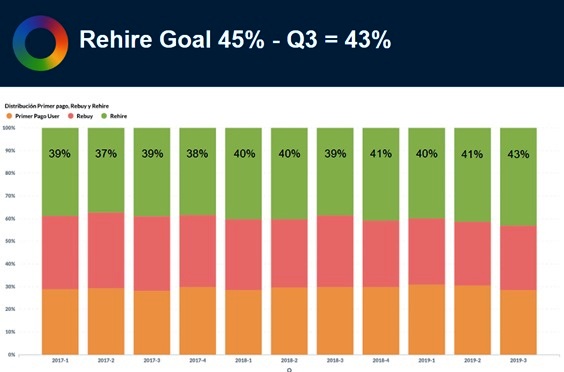 In this graphic, you can see how the relationships formed on Workana are increasingly longer-term. All the changes we made on the platform are driving this;and, furthermore, the bigger clients are the ones looking for these types of relationships.

Other changes to the platform

I’m not going to comment on the Asia goal since that is not the focus of this summary. I’ll only say that it’s going well and that there is now a very healthy base of clients and freelancers working in the region.

I want to tell you about other changes we’ve made, where we’ll also show you what direction Workana is going.

One big, recent change was modifying how our freelancer level system works. It was the first big change since launching the system in 2013. We waited 5 years before doing something new and it was because we knew that it was something that really affects you as freelancers. However, we knew that the previous system didn’t take into account what Workana is today, not to mention what it is becoming.

The major change is that previously, reaching a level meant never losing that status, unless you received an infraction. For some time, it hasn’t seemed right to us that a freelancer who had reached Hero level, but who rarely sent bids (or won jobs), should be on the same level as another Hero who is working through Workana all day, every day. We want to give benefits to our true partners—those who are really committed to the platform.

If a client posted a job and received a proposal from a Hero freelancer who is always active and doing a good job on Workana, and another proposal from a Hero who just showed up for this project, they had almost the same priority for recommendations and appeared as equals. We think that freelancers who are showing constant results on Workana should have the best opportunity.

“We want to give benefits to our true partners – those who are really commited to the platform.” 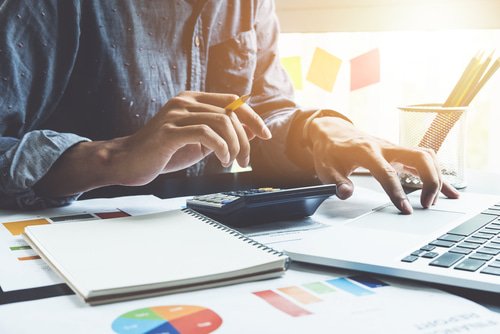 I understand that the change affects many of you, and clearly challenges you, because now you have to demonstrate results in order to maintain your Hero status. But I want you to understand my previous points: now there will be a lot less Heroes, a lot less Platinum, and a lot less Gold.

The ones who will feel this change negatively are those were sitting on their Hero status and only using it occasionally to make proposals, but not working as hard as you are, while still obtaining the same benefits. It even means that now being Platinum or Gold has much more value. Because there are (a lot) less freelancers occupying those levels. Clients will value bids from Gold-, Platinum-, and Hero-level freelancers much more than before.

New accounts controlled on the platform

Another huge change, perhaps less obvious for those who are already a part of Workana, is the controlling of new accounts. Previously, someone could create an account on Workana and begin bidding right away, without any type of selection process to validate if the freelancer was qualified to do the jobs they said they could do. Now, of the almost 60 thousand freelancers who sign up on the platform each month, less than 5 thousand achieve an approved profile to be able to make bids.

This change brought very positive results for the current freelancer community. The top freelancers encountered less competition from non-proven freelancers. The freelancers who did achieve an approved profile on Workana had to make up to four times less bids than previously to find their first project.

And, the clients encountered a lower amount of proposals for projects, but of much better quality, which allowed them to more easily choose the freelancer they wanted to work with.

“The freelancers who did achieve an approved profile on Workana had to make up four times less bids than previously to find their first project.”

Workana is far from perfect, but has improved

We know that Workana is far from perfect. We have been doing this for 7 years and have gotten some things wrong and some things right. But we have become the largest freelance work platform in Latin America, Brazil, and Spain. 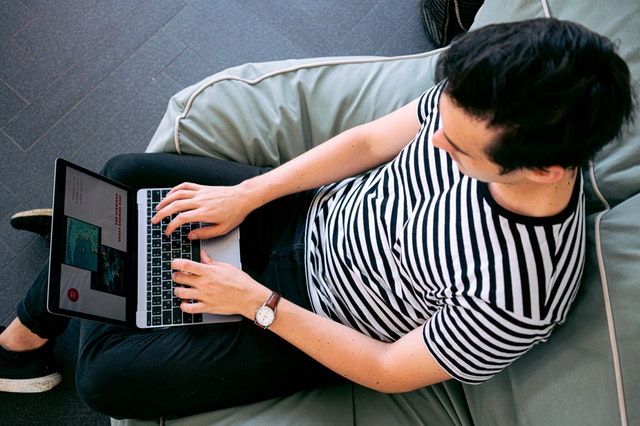 And we know what we want: clients who are looking for quality (and who are not focused on price) and who find the best freelance talent as quickly as possible.

We know that for each of those, we need to do some things differently:

We genuinely believe in these changes and know that the community we want is made up of clients and freelancers as committed to success as anyone who is part of Workana. The direction we took and changes we made in 2019 will continue and expand in 2020. We hope you choose to continue working with us in this new year.

2020 Trends: How is the ecommerce and retail sector preparing for this new year? 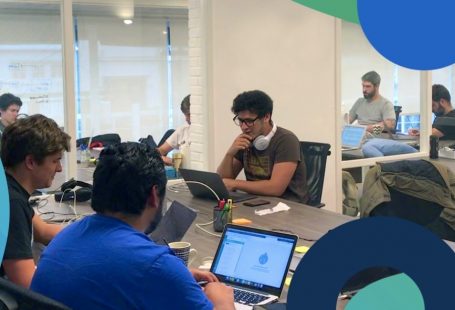 10 keywords to get more clicks on your titles